Meet One of Breckenridge's Most Decorated Skiers

In Breckenridge, it takes a lot to earn a nickname like “Crazy John.” But being the first person on earth to exceed 130 mph on skis makes the cut.

Former speed skiing champion Crazy John “CJ” Mueller moved to Breckenridge from his hometown in Denver in 1970 at age 19. He arrived at a hotel called the High Tor and took a job as a dishwasher.

In the summer, he landed a job in construction and moved into a small house on Main Street. Through the next couple of winters, the Colorado native discovered how much he enjoyed testing his speed on skis.

“In the ‘70s, a guy who ended up being my best friend joined the race team – the Breckenridge Ski Club. He got so much better so fast, I decided to do it, too. I realized I really liked downhill racing,” he says.

Mueller began competing and improving his speed in spite of a couple of major injuries, including a broken wrist and broken back. It was during a winter in France, however, that CJ discovered downhill racing just wasn’t fast enough. Three-time French Olympic ski champion Jean-Claude Killy was a spokesman for Breck when Peak 9 first opened (previously the resort was comprised only of Peak 8) and arranged to do a race team exchange between the Breck team and the race team from his home resort, Val d’Isere.

“When I went to live there, they said, ‘listen, we have a friend who is the world speed record holder for women. They’re testing a new course in Les Arcs,’” CJ recalls. “I hit 100 mph on that track.”

In speed skiing, racers are only on course for 15 seconds. There are no turns or gates. The objective is to become as aerodynamic as possible, getting into a tight tuck and staying there. While you might think CJ honed this skill by bombing down some of Breck’s (then) steepest runs – like Mach 1 or Tiger – he actually refined his talent for breaking land speed records on what is possibly Breck’s gentlest trail.

“The interesting thing is I developed a feel for going fast on Four O’Clock run,” he says. “We’d get the last ride up Chair 2 at the end of the day before [ski patrol] went out on sweep and tucked down Four O’Clock. It wasn’t fast, but it was challenging to be faster. There were two, three, four of us racing each other down. If one guy pulled up, you had to adjust your tuck so you could try to catch him. When I got to the speed skiing track, it was easy to be in a fast tuck. I did it on the last run of the day, day after day, year after year.”

In 1987, CJ became the first human being to exceed 130 mph on skis. The following year, he broke the record again at 136 mph. Competing for the U.S. Speed Skiing Team, he went on to win or land a podium in several World Cup races and finished 10th in the 1992 Olympics in Albertville, France, reaching a top speed of 137 mph. 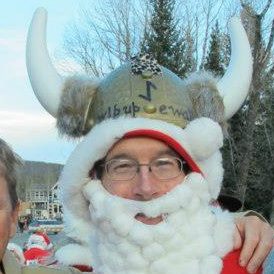 Since retiring from racing, CJ has spearheaded numerous fundraising events for local youth athlete foundations and the Jimmy Huega Center. He even became a celebrity dancer for Dancing with the Mountain Stars to raise money for St. Anthony’s Hospital. He has been named Breckenridge Ullr and Mardi Gras King and assumes the role of George Washington every year in Breck’s Fourth of July festivities. He has a run named after him on Peak 7 (C.J.’s) and is responsible for naming numerous others (Whale’s Tail, Debbie’s Alley, Vertigo, Easy Street, Zoot Chute and The Zipper). In 2014, he was inducted into the Colorado Ski & Snowboard Hall of Fame and has been nominated for the national Ski Hall of Fame.

In spite of two hip replacements (after which he was back on skis in two months), he still skis nearly every day and takes occasional international ski trips with his (20-year-old) daughter. Last season, he put in 140 days on the mountain and at the age of 65, he’s on track to at least match that for 2016-17.

“I make a lot of turns now,” he admits. “Once in a while, I let the skis run if the snow is feeling right. I doubt I’ve gone more than 60 mph more than a few times in the last few years.”

Looking back on the days when the town of Breckenridge was mostly dirt roads and he and his friends would race down Four O’Clock, ski under the bridge to Main Street and – still in their skis – herring bone up to the old pharmacy for sodas, CJ doesn’t see himself putting the skis away any time soon. Not when he has inspiration from the likes of Breck founder Trgve Berge.

“It’s weird to think when I came in 1970, it was the 10th year of Breckenridge. Now all of a sudden I’m one of the old timers,” CJ says. “Trgve’s going to be 85 this season. He’s giving us all hope that we’ll be skiing and having a good time 20 years from now.”